Already under siege in many quarters, Globalization has now added the seemingly unstoppable spread of the Corona Virus to its already dubious credentials. As expected, not one single country has been spared, rich and poor suddenly standing on the same level playing field – a milestone economic globalization never accomplished despite mainstream media coverage tirelessly reporting otherwise. A treacherous pathogen, Corona’s desperate seek for hosts to ensure its survival also operated as a mole invading human bodies silently, the host remaining oblivious to the ongoing attack while recruiting more hosts unknowingly. Indeed, Corona is an insidious viral multiplier of the Globalization process.

While initial lockdown policies were first deemed autocratic and anti-democratic, most countries ended up adopting them promptly and conveniently forgetting such adjectives. Inaction or political reaction in others, including so-called democracies, was not the exception. The real winner here was the virus, while the number of deaths grew unnecessarily. The race for a solution soon started, governments pumping billions into research and the private sector to develop a vaccine at “warp speed.”  Nowadays, almost 200 vaccines using a wide range of technologies are currently under development while seven are being deployed worldwide, all under emergency approval conditions.

Where are these vaccines traveling to?

Figure 1 below shows the top destinations of Corona vaccines, 1 Includes 188 countries only, based on data furnished by ourworldindata.org including 18 countries that have been able to get over 5 million shots. The number within each bar is the global share of that country, while the color identifies country income levels based on World Bank’s classifications. 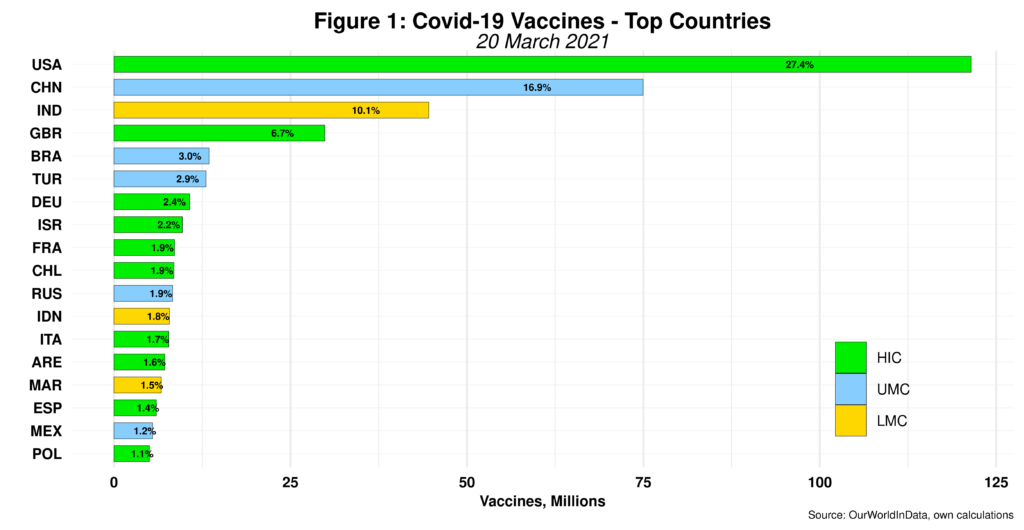 No countries from the low-income rubric (LIC) made the cut. Most countries on the graph are high-income (10 of them), while only three represent lower-middle-income (LMC) nations. While one country, the U.S, has grabbed more than one-quarter of the global vaccine supply, three countries (the U.S, China and India) have almost 55% of all shots. Vaccine global shares rapidly decline as we move down the list of countries.

The picture for vaccines per capita is somewhat different, as shown in figure 2. 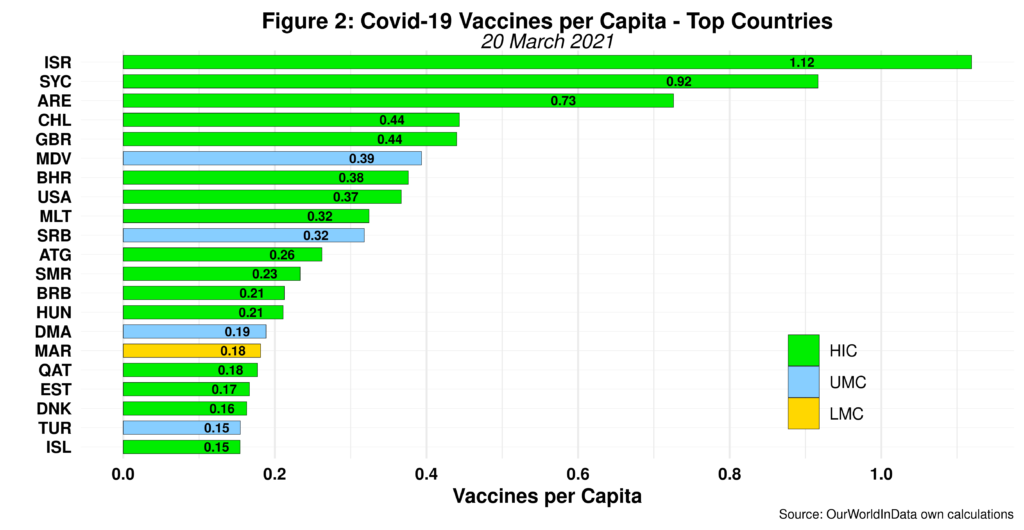 Israel, Seychelles and the UAE top the charts here, the first one being the only country that crosses the one person per capita threshold. Recall that some vaccines require two shots. Countries deploying such vaccines thus must secure a supply that doubles current populations. Israel uses only one two-shot vaccine brand, so the real per capita ratio is 0.55. The same goes for most other countries. The UAE might be a bit of an exception as it offers four different types of vaccines, ignoring the new geopolitics being pushed by old Cold War minds that are now making a big comeback at the wrong time. A notable fact of this list is the proliferation of countries with relatively small populations (Maldives, Bahrain, Malta, etc.). Seychelles, for example, has just under 100K inhabitants. It thus needs only 200k vaccines, which might be easier to obtain than otherwise. In fact, the U.S and the UK are the only countries on this list with populations over 40 million. Note also that 18 out of the 21 countries depicted are members of the high-income club. On the other hand, Morocco is the only country representing lower-middle-income nations while the poorer nations are conspicuously absent. Income is thereby a factor in vaccine global distribution. 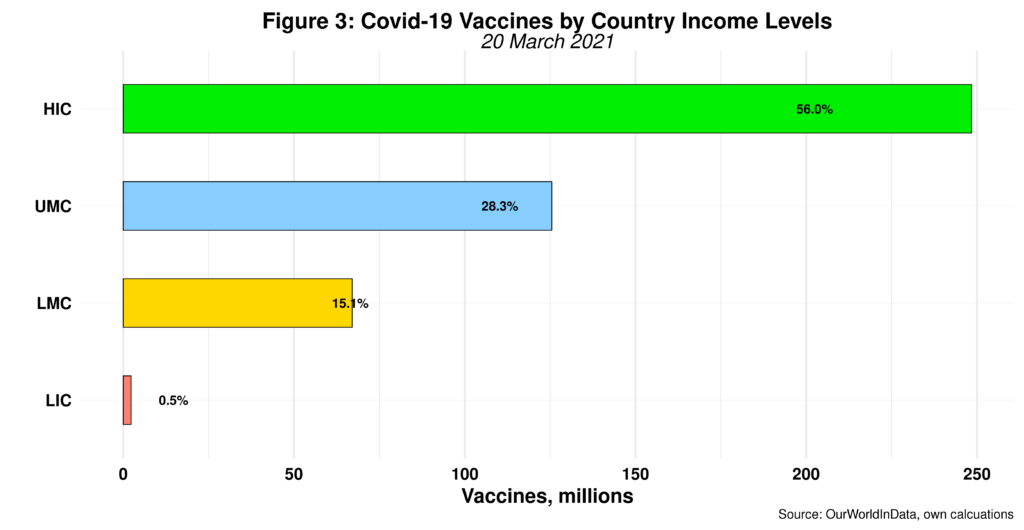 The global inequality on vaccine supply access is just astounding. The rich countries have more than half of the world’s supply while the poorer nations do not even reach one percent. Bear in mind that our data set includes 59 high-income countries with a population of 1.25 billion people, or 16.5% of the total. Together, lower-income and low-income countries comprise 78 countries, have over 50% of the total population but just access a little over 15 percent of the total supply. China is considered part of the upper-middle-income group and, as we saw above, has 16.9 percent of the global vaccine supply. Upper-middle countries sans China, a total of 50 countries, thus have 11.4 percent of the global supply. India, classified as an LMC, has 10.1 percent of the supply, leaving the other 44 LMCs with 5 percent. In a few words, most developing countries have little to no access to the existing Covid-19 vaccine supply.

It is now time to look at all 188 countries together in one shot, as figure 4 does. Bubble size is proportional to country population. 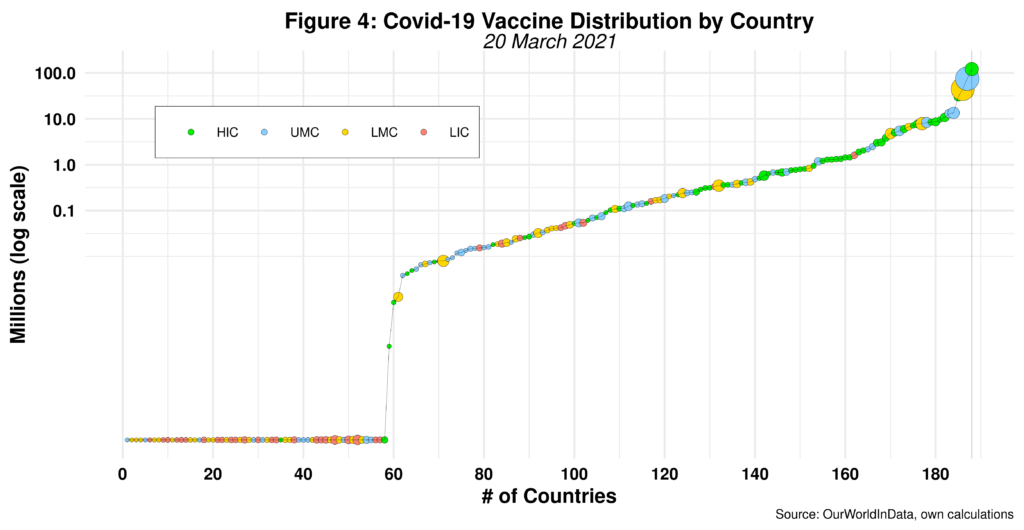 58 countries have no access to vaccines whatsoever, including two small HIC (Taiwan and Brunei). Furthermore, 49 countries have access to less than 100k vaccines, again including several HIC and UMC.  At the other end of the spectrum, 35 countries have 1 million or more vaccines, 22 of those being richer nations. We can then conclude that while country income is critical, it is not the only factor at play here. Country size, geopolitics and state capacity (recall the storage requirements for some of the vaccines) also play a role.

At any rate, inequality in the global vaccine supply is extreme, as shown in figure 5 that displays its Lorenz curve. 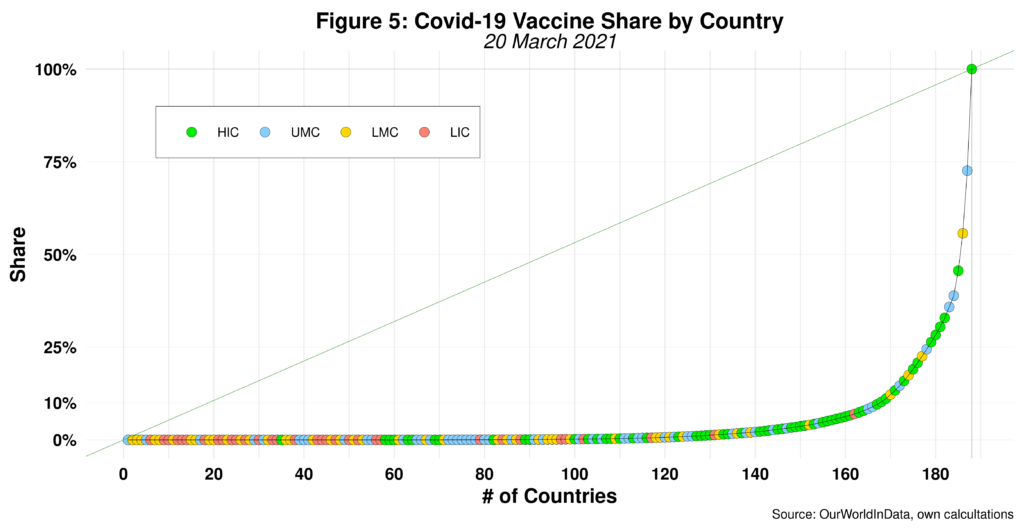 Eleven countries control 75 percent of the vaccine global supply while 167 nations can only access 10 percent. The Gini coefficient for vaccine distribution is just over 91 percent, even larger than that for Bitcoin.

The good news is that, unlike Bitcoin and family, such a situation is untenable if humanity wants to stop the virus once and for all. The supply of vaccines is indeed limited. Nevertheless, the Global South’s calls for suspending intellectual property rights (as in the case of HIV/AIDs) to boost production have fallen on deaf ears, the same that have been pushing for unfettered globalization for decades. Is this “ethical and responsible”? Pace COVAX, a short-term solution has yet to be found.

The bright side of globalization must prevail – vaccines for all should be available. That should not stop us from continuing to besiege its larger dark side.