As previously mentioned, data centers (DCs) depend not only on energy consumption but also require plenty of water for survival, just like humans. We thus have increasing competition for a critical resource, especially when droughts and wildfires are increasing. Not surprisingly, the availability of adequate and nearby water resources is one of the indicators used to attract DC investors and decide their optimal geographical location. In the U.S., for example, cities and towns attract DCs by offering reduced water consumption rates in addition to the usual tax breaks. In any event, DC water consumption can have not only an environmental impact but also affect local populations socio-economically  -as consumer prices could go up, access to the precious liquid might be more limited, and land use changes might be needed as DCs expand, for example. 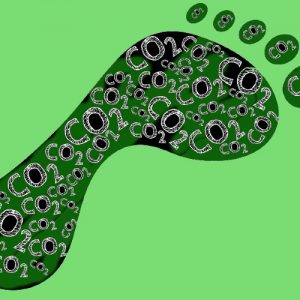 Green House Gas (GHG) emissions data do not directly capture that as it is focused on looking up at the sky and measuring the presence of such gases in the atmosphere, placed there primarily by human activity nowadays. The same can be said about e-waste, one of the most nefarious and innovative outputs of the accelerated growth of digital technologies. We cannot find any evidence of its impact by looking at the GHG data of countries where e-waste happily resides illegally in many cases – while no one is asking for documentation.

Note that our production blueprint depicted in the previous post neatly fits into the ecological footprint idea. Both give primacy to the production of commodities, tangible and intangible, that our current form of society constantly demands in the name of infinite and unstoppable progress. They thus provide a comprehensive framework to assess the real impact of digital technologies on the environment.

Poking Around in the Basement

A recent brief by the International Energy Agency (IEA) indicates that, in 2020, DCs (including transmission networks) emitted close to 300 million CO2-equivalent (CO2e) tons. Assuming all such emissions are CO2, for the sake of argument, DCs will be ranked among the top 20 emitters for that year, behind Italy and just ahead of Poland. A 2020 ITU report is the source of that number, which emanates from the UN Agency’s estimations based on a 2015 baseline study supported by relevant academic research on the subject (more on that later). In any event, the IAE seems unaware of recent research on the environmental footprint of U.S.-based DCs. That study finds that this set of DCs emitted 315 million CO2-equivalent tons or 0.54 percent of total GHG emissions for the country. Recall that the U.S. hosts 30 percent of all DCs, so we can easily conclude that the ITU and IEA figures are seriously underestimated. Research shows that the actual number is around 450 million tons, thus approaching the top ten global emitters while competing with Brazil and South Africa for positioning.

Figures on DC energy consumption tend to diverge less. Based on more recent studies, the IEA shows that DCs consumed between 220 and 320 terawatts-hour (10^12) in 2021, roughly one percent of the world’s total. Such a range will place DCs within the top 60 and thus ahead of most countries worldwide. Nevertheless, the good news here is that while data creation and storage has increased substantially, the energy required to sustain it has grown much less, thanks to efficiency gains and energy-saving innovations. However, if the predictions about the upcoming exponential growth of IoT-related data are accurate, it would not be surprising that such a trend reverses – not to forget that efficiency gains tend to dwindle over time.

While estimates for DC’s environmental footprint are sparse, the latest research provides excellent leads. The global median carbon footprint for one gigabyte of data is 32 grams of CO2e. That translates into nearly 100 million tons of CO2e per year. However, this estimate only covers fixed-line networks and thus excludes user devices and mobile networks, which nowadays generate as much traffic, if not more. Unfortunately, data for the latter is not available. However, the number cited above on total DC CO2e emissions can help fill that gap.

Using the same calculation method, DC’s annual water footprint is 2.6 trillion liters, matching the amount of water Sweden consumed in 2010. The latter has gone done since. Finally, the land footprint ascends to  3,400 square kilometers, comparable to the urban area occupied by the city of Jakarta, where more than 30 million people inhabit. In sum, the environmental footprint of DCs is by all means astounding. And yet, the situation could get more critical as 5G becomes more accessible and IoT faster growth starts to hit those in the basement.

And we have yet to take a peak at the ICT sector and the now infamous tech behemoths.