Since the early 1980s, Governments have taken a bad rap. Menacing fingerpointing from most quarters ended up on a consensus that loudly declared them personas non-gratas. The 2009 Global Financial Crisis started to turn the tide. At the time, governments once again came to the rescue of capitalism, unveiling gigantic financial packages to prevent critical financial institutions’ failure. Once the recovery started a few years later, Governments took the back seat once more, backed by universal austerity policies that, in hindsight, did more damage than anything else – especially in terms of income and wealth inequality.

The ongoing pandemic has once again demanded the strong intervention of Governments. However, this time around, the crisis is impacting most, if not all, sectors, in addition to finance. In this context, the Governments’ responsiveness and effectiveness are crucial. Undoubtedly, digital technologies can augment them if they have been deployed strategically. In the previous post, I depicted the core pillars of digital government (DG). Here, we will look at its cross-cutting pillars.

In both good and bad times, Governments have a wide variety of roles, more so during the former. While limited to the public sector, DG thus cannot live on its own. Instead, it is part of broader development processes and national public policy development. It thus intersects other areas. The four cross-cutting themes that impact DG include pillars that are essential not only for DG but also for many other areas and sectors in society. They are beyond the exclusive purview of DG but can still directly or indirectly impact its evolution. Figure 2 depicts the four pillars and their linkages. 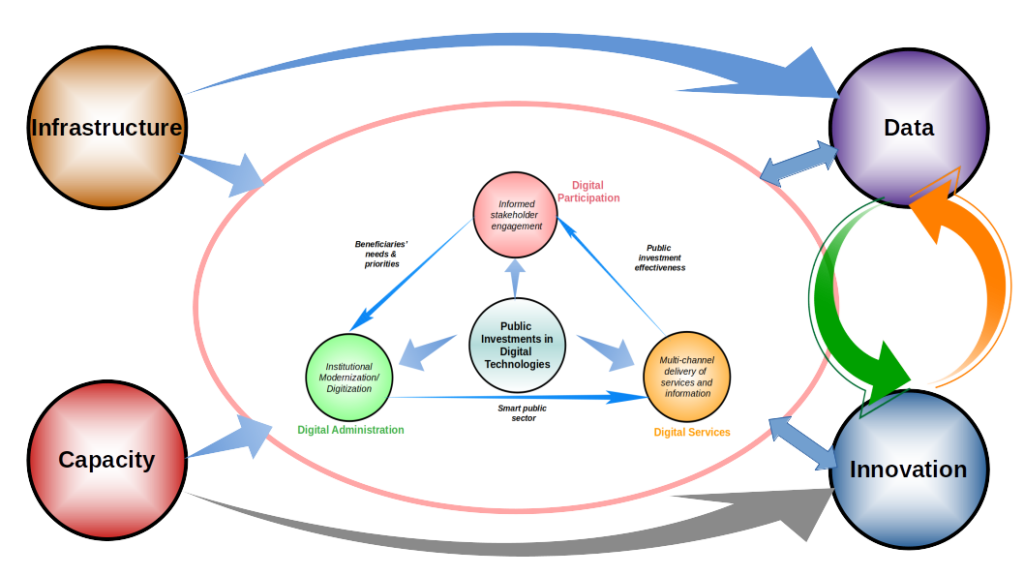 The pillars are described below.

The evolution of each of these pillars and their interaction will either limit or propel DG development. In most developing countries, each of them’s evolution is uneven and usually not planned in a sync or sequential fashion. Moreover, national policies for each are usually in place when DG policymaking or implementation is about to take off. Updating such policies might be required but can become a complex goal in complex political contexts or when political will is conspicuously absent. In any case, national policies that also impact DG should factor in the public sector’s specific requirements without changing those of the private sector or civil society.

DG undertakings are thus complex, given its own internal dynamics and the interaction with external pillars that also have their own dynamics. Add to this that DG policies should also support international agendas, such as the UN SDGs and national development agendas that seem to change every time government changes due to electoral processes or others.