Running on the coattails of electronic commerce, Digital Government (DG) first saw the light of day over 20 years ago. Initially christen as electronic government or e-government, it has since experienced multiple name changes, ranging from e-governance and transformational government to intelligent and smart government. Nowadays, the field seems to be enjoying its run as DG. Regardless of its actual denomination, DG’s indisputable mandate is to transform public institutions via the strategic deployment of digital technologies – the emphasis placed on transformation, not technologies. 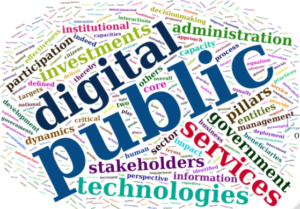 Such digital transformation must modernize the public sector, thereby leading to increased overall institutional capacity, enhanced provision of public goods, services, and information, and the promotion of transparency and accountability of public institutions. The latter, in turn, demands the active engagement and meaningful participation of citizens and stakeholders.

Traditional approaches to DG assume a transactional perspective. They define the practice in terms of the interactions between government and other sectors. Thus the now widely used acronyms of G2G, G2B and G2C, among others. DG maturity levels are then identified based on the reach and complexity of such transactions or interactions. However, this approach has two drawbacks. First, it assumes that state capacity is the same across all countries, regardless of development or income status, and, consequently, has no role in DG deployment and development. The fact that new digital technologies can indeed increase state and institutional capacity in terms of effectiveness and responsiveness is thereby missing in action. The current pandemic is also a reminder that national states should have adequate capacities to respond to crises in an agile, compelling and transparent fashion.

Second, the traditional DG perspective focuses on the supply side of the DG equation: governments, thus leaving out citizens and stakeholders who could indeed play a critical role in the design, implementation and oversight of DG strategies. Not that the approach totally ignores people. The problem is that it sees them only as beneficiaries or clients but not as stakeholders who should have a voice in decision-making processes. Digital technologies have created new interactive platforms where interactions between governments and stakeholders can occur in real-time and otherwise.

Adopting a perspective that places the dynamics of public institutions at the core tackles these two issues front and center. Public entities need to find an adequate path to ensure public investment decisions in digital technologies are effective and end up benefitting all stakeholders. In this light, DG can then be defined as the set of public investments national or local authorities make on digital technologies to augment the efficiency, effectiveness, capability, and responsiveness of the public sector while fostering transparency and accountability. Such investments also help build and strengthen the institutional capacities required to deliver public value and enhance overall human development. Having the capacity, institutional and human, to respond timely to beneficiaries is at the core of the exercise, especially nowadays in crisis times. The question here is how to create such capacities sustainably while hitting the ground running.

Public investment processes have two overall interrelated components 1. Decision-making instances; and 2. Specific investment targets. The former is usually undertaken by the head of the public entity or by a group of government decision-makers who must agree on the investment targets put on the table by the various government stakeholders. While a pure top-down decision-making process is feasible, more often than not, the participation of other government stakeholders in the process takes place, particularly if the proposed investment is considerable. The involvement of non-state actors is undoubtedly less common and is not mandated by any sort of public legislation or guidelines. Target competition within and between public entities is part and parcel of the investment equation and is directly proportional to the size and scale of the proposed investment.

However, in all cases, targets comprise two interconnected layers. First, administration and management processes became subject to review. They required an overhaul either due to inherent and glaring inefficiencies or the emergence of new alternatives to deliver the same or improved outputs. Public business processes are thus the core aim here. Second,  the delivery of public services and information to either scale them and reach an increased number of beneficiaries or improve the quality of existing ones.

Bear in mind that not all public institutions deliver public services. Some actually do not provide any services to the public (planning, economy, etc.). Others only offer services and information to other public entities (public service, public administration). Public institutions are thereby not monolithic and have clear non-overlapping mandates usually defined by national laws and legislation. In principle, public investments in digital technologies should be in sync with the institution in question legal mandate if increasing public value and human impact is the core goal.

At any rate, public institutions have their own internal dynamics that determine how public investments in digital technologies (and most others) are defined. The drivers of such dynamics include participation (or lack thereof) in decision-making processes, administration and management and public service provision. Acting in concert, these drivers open the door for the potential strategic deployment of digital technologies within the public sector. Obviously, the public sector does not and cannot live on its own. External dynamic processes that are beyond its purview also impact its own dynamics. Within a pure DG perspective, themes such as infrastructure, local capacity, innovation, and data are critical not only to public institutions but also to all actors and stakeholders.

With this in hand, we can now develop a DG framework comprising both the internal dynamics of public institutions and the external dynamic factors that have an indelible impact on the sector. The former shall consist of three interconnected pillars, depicted in Figure 1 below. 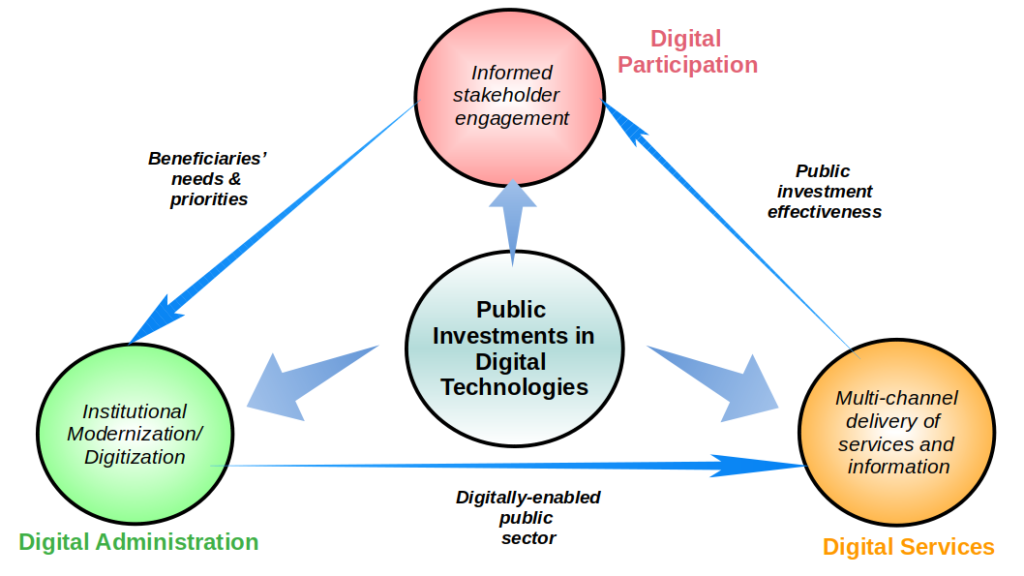 The pillars are defined as follows.

As these pillars are closely interrelated, sequencing them is thereby fundamental. Ideally, digital participation should be the very first step as it is here where investment targets are identified and agreed upon. For entities that provide public services and information being able to gauge the demand side of the equation before committing public funds can make a significant difference on the ground in terms of impact and investment effectiveness. For those others that provide services to other public entities, the same rationale is at play. However, Digital participation is not limited to virtual interactive engagements. Having an informed and prepared set of stakeholders is perhaps more critical. Access to relevant information and data is thus critical – and digital technologies facilitate their dissemination via a wide variety of channels.

Once priority areas are identified in this fashion, digital administration is next in line. Identifying and evaluating the business and administrative processes and management practices that currently furnish related services will drive the public investment portfolio. Note that digital administration investments are not limited to technologies as they usually also demand business process re-engineering, change management process and retraining of the civil service, among others. The latter is as important if not more than deploying state-of-the-art platforms or acquiring the latest gadgets.

Finally, the digital services pillars, the window to the public for many governmental institutions. This is where the effectiveness of many digital investments within the government will get its public verdict. Digital services are also the most technologically-driven pillar of all, and one that quickly garners the attention of both policymakers and practitioners driven by technological innovation. In practice, the distinction between digital administration and digital services might become quite blurry. Still, losing track of it can yield adverse outcomes the public will see sooner rather than later. Indeed, tackling digital services without first taking a shot at digital administration can quickly lead to failure and prompt backlash against digital technology investments. Best practices here also suggest that the best approach to scale up services is to use various channels, including non-digital when appropriate. That is particularly relevant for developing countries where infrastructure, connectivity and access are still incipient.

Together, the three pillars can trigger a virtuous cycle that can ensure public investments in DG are sustainable in the long run and have the desired human development impact. However, governments are free to tap into any of the DG pillars, thus ignoring their sequencing. No inner DG mechanism exists to prevent that from happening other than a posteriori failures so common in this field.

I will explore the other DG pillars and institutional arrangements in the next post.

One thought on “Digital Government Revisited”