Strongly supported by behemoth tech companies, the “ethical and responsible” AI discourse has managed to almost completely overshadow the relevant conversation on the potential socio-economic impact the resurgent technology might have in developing countries. While such discourse’s subtle agenda, apparently now failing, is essentially aimed at avoiding any government regulation by promoting “AI for good,” research on its economic impact seems minimal in comparison. Research on AI public policies in developing countries I completed with a college at the end of last year (to be published soon, hopefully) showed that most Global South countries are not even thinking about the topic. And the few that have taken steps overemphasize its ethical aspects – some even openly opposing any regulation – thus falling short of providing any new policy proposals to confront the upcoming socio-economic AI disruption will trigger at the national level. Note that industrialized countries that have completed national AI public policies are very mindful of such impact and have proposed concrete ways to carve their own niche vis-a-vis the two giants in the field, China and the U.S.

Mainstream neoclassical economics argues that, in the long run, countries in the Global South will eventually catch-up to their Northern peers. Convergence will thus happen once this group of countries can fully master technology and muster sizable private capital, foreign and national. Do not hold your breath, though. While income in developing countries has certainly grown rapidly in the last 50 years, global convergence is still a pipe dream, especially in low-income and least-developed countries where almost two billion people live nowadays. Those who have moved up along the steep slopes of income convergence have benefited from having either abundant natural resources (oil, minerals, etc.) or an almost unlimited supply of unskilled and thus cheap labor resources (for basic manufacturing and services) – or both. 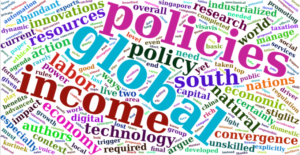 A handful, including China, Singapore, South Korea and Singapore, did manage to create national innovation systems that accelerated national income growth while enabling them to compete with the most advanced nations at the very high-end. Can other developing countries replicate such a success?  At any rate, most developing countries have yet to take off. Instead, they seemed stuck in a technology space where the exit signs have somehow been removed. In this light, AI is both a threat and an opportunity, depending on where you are in the convergence path. Immediate action is required, regardless.

Building on their previous research, the most recent paper by Korinek & Stiglitz explicitly addresses the challenges faced by the Global South vis-a-vis the ongoing, relentless AI tsunami. The very character of both AI and the Digital Economy provides the overall context. In all its many incarnations and perspectives, the former will further enhance automation, producing more with less labor and natural resources, the very foundations of dynamic income growth in the developing world. Almost inevitably, AI will make a dent in countrys’ comparative advantages, thus leading to relative income reduction and augmented inequality. The latter is a Digital economy feature where “super-monopolies” reap most innovation benefits. We live in a winner-takes-all economy where monopoly power and spillover effects dominate. Indeed, other cutting-edge research shows that innovation, while not a zero-sum game, has propelled top income inequality in developed nations. While pundits and tech-optimists remind us almost every minute about the infinite marvels of innovation, Korinek and Stiglitz argue that no sound economic theory ever postulated that technology will benefit all. A more honest and accurate perspective admits that winners and losers do emerge from technological disruptions. Domestic policies are required to manage such complex processes. The Global South thus needs to move its rear from the comfortable fence and hit the ground running.

The authors argue that two overall types of innovations are in action. One is the well-known labor-saving innovation that will displace workers, also impacting some high-skill jobs. The Future of Work agenda falls into this category, albeit mostly focused on industrialized countries. The other, rarely discussed, is natural resource innovation that allows firms to use fewer resources while increasing output. Developing countries with a  “natural-resource intensity” above the global average will experience a decline in exports and national income if natural resource innovations are introduced in the world economy. The same goes for countries with abundant unskilled labor if labor-saving innovations are introduced and their capital to labor (“capital intensity”) ratios are relatively low compared to global levels. However, In the long-run, the authors’ model suggests that technological innovation could be labor-using (not labor-saving), especially in developing countries with abundant natural resources, thus increasing exports and national income. In this context, countries in the Global South need to be aware of their current positioning in the world economy to develop appropriate development policies. Not all of them face the same situation and, thus, a one size fits all approach will not work.

Being that as it may, Konerik & Stiglitz argue that the current AI technological innovation wave is unique and introduces additional challenges to developing countries. For starters, catching up to the most advanced nations is now more difficult. Monopolies and greater barriers to entry are at play here too. General education, which was a development driver in the past, has lost its luster. Unions have lost relevance while the most dynamic economic sectors are relatively small. Furthermore, the concentration of economic and political power introduces formidable challenges to changing the global status quo or developing adequate national policies. Finally,  AI policy development is much more difficult to manage for policymakers in the Global South, given its mystical complexity and seemingly high requirements. As AI is not produced in developing countries, policymakers should also explicitly address technology adoption strategies on top of national innovation policies.

The final section of the paper offers policy recommendations that we can group into traditional and innovative. The former includes taxation and redistribution policies that should target monopoly superprofits, especially if the local tax base is in decline thanks to labor-saving innovations. Social protection and Universal Basic Income are good redistributive measures. Government expenditure policies to increase the demand for unskilled labor and equalization of market incomes to favor those at the very bottom. Infrastructure investment is yet another policy pillar, digital infrastructure included. Education, while relatively losing some steam, is also a critical area nevertheless.

The policy innovation side includes a shift from traditional income redistribution to income pre-distribution policies. The idea here is to plan ways on how income distribution should pan out before it actually happens. Furthermore, a multi-pronged approach will be needed to find new ways to generate income and promote overall well-being. Industrial policies thus need to broaden their scope, go beyond manufacturing and include agriculture and services. AI could trigger large productivity gains in the rural sector, while tourism is one service area that will easily resist automation. National policies should also promote the strategic adoption of labor-using technologies developed in industrialized countries while adapting and redesign them to the local context and promoting FDI that enhances such a process. Here, industrial policies must be tightly linked to labor policies. In developing countries, governments must steer innovation and foster development towards specific directions where social concerns are the key driver.

However, since we live in a globalized, interconnected world, domestic development policies, while necessary, are not sufficient. To date, global rules have been created, implemented and enforced by rich countries. The resurgence of AI will not necessarily change this -on the contrary, it might exacerbate it. Yet, the authors see the light at the end of the tunnel as AI rules are still being drafted and global civil society might have a voice in the final outcome. Moreover, rich nations are certainly keen on preventing more resistance to globalization in developing countries.  And finally, they hope that international institutions will play a role by ensuring that all countries have a voice when global decisions are made. Against this backdrop, they propose four global policies 1. Global taxation; 2. Global competition policy; 3. Intellection Property Rights rebalancing; and 4. Data and information policy.

While AI will continue its unstoppable march, concerted action at a global level is required to ensure its benefits are distributed more equitably. I certainly do not share the authors’ optimism given the current juncture where nationalism and all its relatives seem pervasive. Rarely in history have winners-take-all actors taken action to cede some of their power for the sake of humanity.

Cohesive and resilient collective pressure from below is needed. And we need to start now.