Over six months after its official birth, the COVID-19 pandemic continues to expand globally, as expected. Long-term lockdowns and other complementary measures have impacted, especially in industrialized countries that, back in June, were leading in cases and deaths. Not that the virus has been tamed, not at all. Rather, it now seems to be more isolated, albeit a so-called second wave is expected to kick-off once the colder weather in the Northern Hemisphere starts to gain steam – to fog, your pick. With the notable exception of Africa, developing nations are now in the midst of the first massive spread wave. Governments there have also adopted similar containment measures. Nevertheless, implementation and enforcement are more challenging thanks to more widespread poverty and less than subpar living conditions.

As shown in figure 1 below, several Latin American countries are now in the top 10 when we account for COVID-19 deaths per million inhabitants. 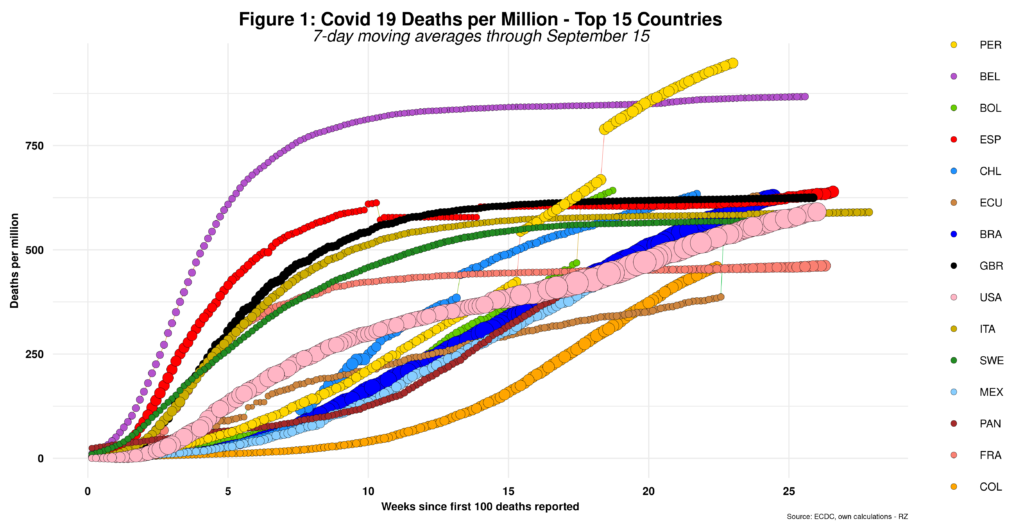 The bubble size for each country is directly proportional to the number of cases per million. We can distinctly see two overall trends. In one set of countries, the curve has already flattened and smooth down for a few weeks. Here, the US is the exception as the number of deaths has constantly been increasing, probably due to the absence of a national containment policy. The second set of countries is comprised of Latin American countries, with Peru leading the charge and taking the infamous top spot globally. Bolivia, Chile, Ecuador and Brazil are neck to neck with the other country set. On the other hand, Mexico, Panama and Colombia are rapidly moving in the wrong direction. The graph also hints at different acceleration and deceleration rates across countries, with Belgium and Colombia being the two outer limits.

Figure 2 below depicts the number of cases per million, bubble sizes depending on national COVID-19 death rates per million. 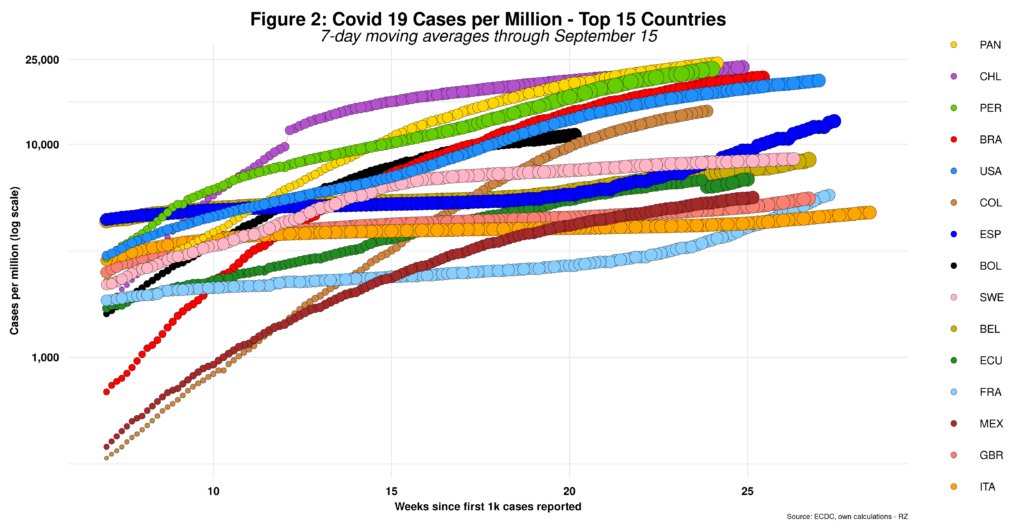 Here, the country rankings are quite different from that of deaths per million. Seven of the top ten countries are from Latin America, with the USA, Spain and Sweden, once touted as a role model, joining the main squad for free. Panama beats Chile and Peru but not by much. Eight countries are above 10 thousand cases per million in a row for several weeks. But cases in the top five appear to be plateauing.

Compared to figure 1 above, the graph also indicates that the ratio of deaths per million to cases per million is much higher in industrialized countries, with France looking like the top contender.  On the other hand, cases are increasing once again in Spain, Belgium, the UK, France and Italy, thus suggesting the imminent arrival of a second COVID-19 tidal wave.