In a previous entry, I explored the connections between digital technologies, economic growth and the environment, using the concept of Sustainable Development (SD) as analytical reference. The figure below depicts yet another way to see the three development outcomes that must interact to trigger SD. 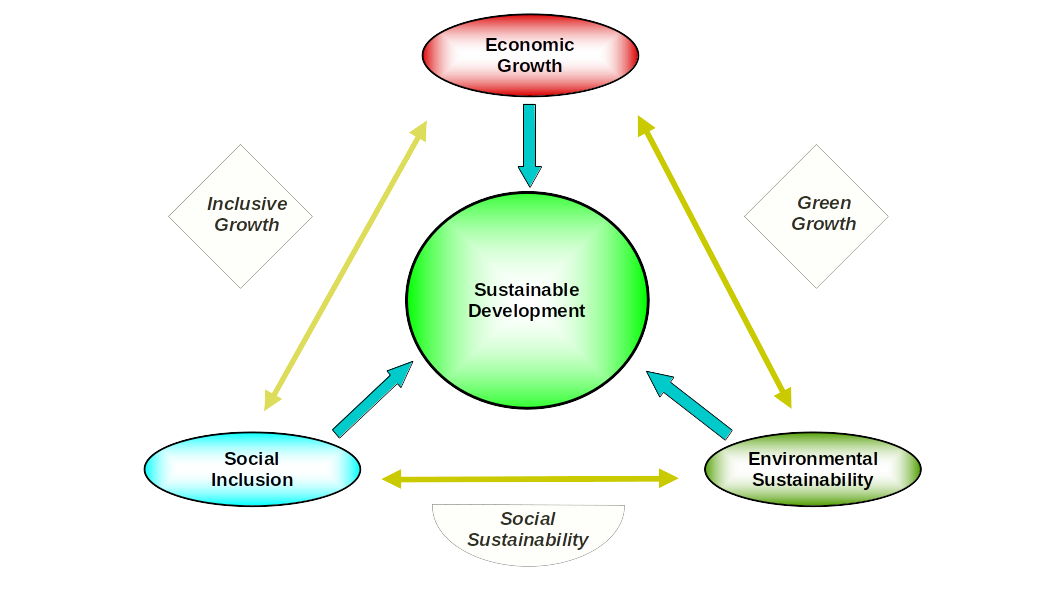 Three other outcomes are also possible if the interaction among the three core pillars excludes one. Inclusive growth, Green growth and Social Sustainability are perfectly viable and logical but should not be equated with SD at any point. Such a differentiation does have policy and practical implications. The same goes for researchers tackling the thorny subject of economic development and its impact on the environment.

I also suggested that Information and Communication Technologies (ICTs) are developmental catalysts that can positively or negatively impact SD and its six different development outcomes (three core pillars, three emerging from pillar pair interactions). I have chosen not to add ICTs to the graph for simplicity. In any event, as catalysts, ICTs can interact with any or all of them, their impact being a function of how policymakers and practitioners positioned them vis-à-vis local development gaps and priorities.

However, to fully grasp ICTs’ potential impact, we first must understand the role economic growth plays. The latter is the primary driver of Capitalist development, which some in other quarters call capital accumulation. Seeking continuous growth is part and parcel of the process, not an incidental occurrence. The graph shows that economic growth has four hats, one showing its membership in the SD club  – its insatiable growth appetite constant or perhaps even increasing across the board. Keep all this in mind.

The standard hypothesis most economists put forward relies on the Environmental Kuznets Curve (EKC, which I also mentioned before) that postulates that economic growth, personified in GDP (or GNI) per capita, initially has negative environmental impact but, as overall per capita income increases over time, it turns the tide thus minimizing its ecological damage. Graphically, such a process is represented by an inverted-U curve. Note that using GDP per capita as a core indicator ignores the various colorful hats economic growth owns.

Over the last ten years, more than 1,200 EKC academic papers have been published, propelled by the imminent global climate crisis heading our way. And yet, while sophisticated econometric models and tricks (been there, seem/done that!) have indeed been called into action, the jury on EKC’s actual relevance is still deliberating. Undoubtedly, there is more than academic reputations at stake. Ideological battles, overt and covert, are also at work here. Those on the mainstream side of the equation are most likely eager to show that insatiable economic growth deeply loves Mother Earth, with no caveats.

I am not going to go there. Instead, I will take a rapid glance at the data, using CO2 emissions as a core environmental indicator and the notoriously biased GDP estimate as the self-appointed representative of economic growth. One of the EKC issues under heated debate is its own scope. That is, is it relevant for all countries or only works for a few – or for none whatsoever. I will start with the latter using figure 1 below. 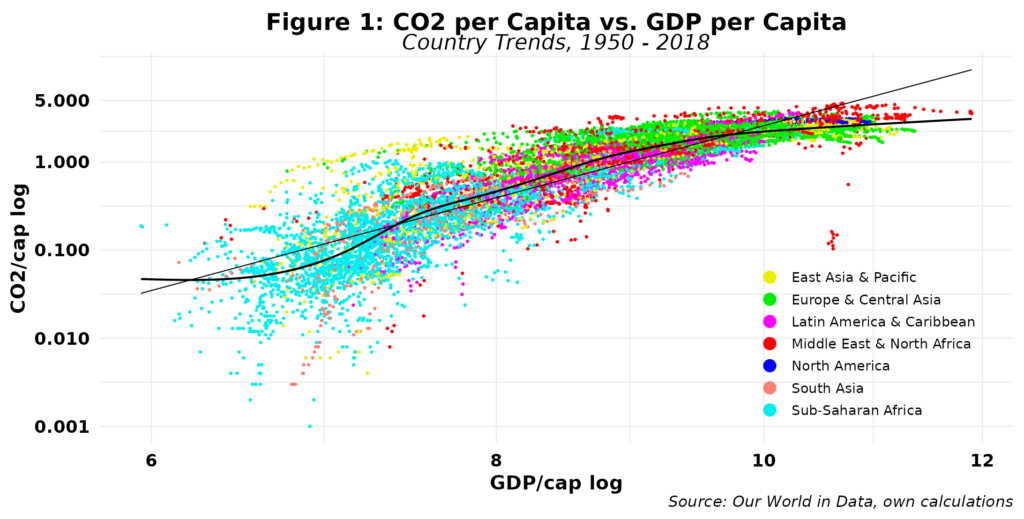 I am using logs for each indicator to tame the outliers both carry. For example, the maximum GDP per capita for the period is 146k USD which is 382 times larger than the minimum, believe it or not. Read the x-axis accordingly. While the graph tracks individual country trajectories, I have colored each with region location to depict patterns across them. The data covers 165 countries and territories and contains over 10,500 data points. The straight black line shows the regression estimates that report an R-squared of 0.755, thus suggesting a strong association between our two core indicators. Note also the neat regional patterns, especially for Europe and Central Asia, Latin America and Sub-Saharan Africa.

The average country trajectory indicates that carbon emissions increase as income grows, but at a slower rate. The polynomial curve fitted to the data, however, demonstrates that the classical logistic (S) curve is in full action here. GDP is briefly ahead at the start of the process, but soon carbon emissions take charge. As income runs towards the 9k mark, the situation is reversed and GDP is ahead again and seems to remain. However, signs of the quadratic EKC are nowhere to be found. We can thus conclude that the EKC does not apply to all countries.

So let us look a bit closer at a selected group of countries. In addition to Great Britain, the Mecca of capitalism, I have chosen the top 2018 C02 emitters in absolute terms. I have also increased data coverage, now starting in 1920. 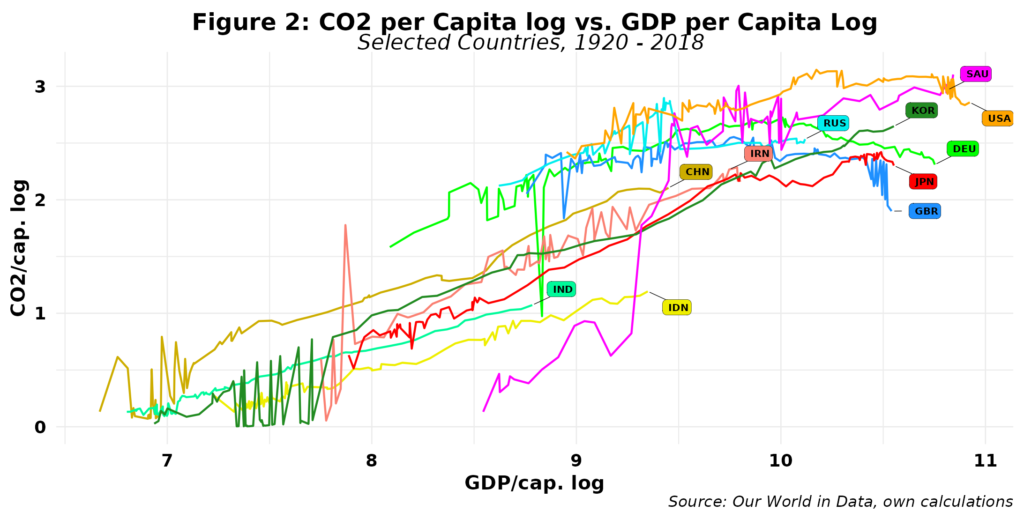 The results are a mixed bag. On the one hand, high-income countries such as the U.S., the UK and Germany show some compatibility with the EKC hypothesis, as emissions show an actual decline, more so in the case of the latter two. But on the other, countries in the same income cohort, such as Japan and South Korea, do not. Russia seems to be the odd case out, as emissions relative to income are starting to rise again after a sharp decline. All other countries in the graph appear to have managed to escape EKC’s wrath, albeit some could argue they have yet to reach the critical income per capita levels to feel its magnetic attraction. In any event, the best we can conclude here is that the EKC applies to a few countries. However, we now need to explore in more detail the reasons for that, given the behavior of other high-income countries that seem exempt from EKC’s spell.

That also opens the door for introducing ICTs into the analysis to see their specific role in both economic growth, all hats included, and CO2 emissions. The work is now cut out for us. So on your marks, get set.