Undoubtedly, cryptocurrencies have gained substantial territory since their inception over a decade ago, Bitcoin leading the charge. What began as a brilliant albeit complex innovation seemingly open only to techies and geeks is now going mainstream, at least in media coverage. Universal use as actual money, however, is still a pipe dream. Bitcoin and the now enormous extended family of cryptocurrencies have yet to become a stable store of value, a primary requisite for any currency aiming to conquer the world, let alone disrupt it. Just ask the US dollar or the EU’s Euro. For now, Bitcoin and company behave more like a roller-coaster built on a steep, tall mountain with apparently sharp and endless ascents and descents in between.

Most developing countries have relatively weak currencies exposed to constant fluctuations, usually losing value in the short run. Indeed, currency devaluation is a nightmare for holders of such currencies. Under the circumstances, the best option is to have in hand, if possible, US dollars or similar stable money. A whole gray market for dollar transactions where buy cheap, sell dear rules is not uncommon. That is partly the reason why some countries have eliminated national currencies and wholeheartedly embraced the US dollar. While the impact of such decisions on those sitting at the bottom of the pyramid can be nefarious and much-touted mainstream monetary policies immediately go out the board, currency devaluation is now vanquished for good. Indeed, no one wants to have in the pocket a currency that can fluctuate widely, more so holders of large capitals. Not surprisingly, capital flight is thus a staple in many of these countries.

Regardless, cryptocurrencies seem to have their own dynamics as they are not yet fully pegged to the real sector of the economy as regular currencies. Instead, they have befriended the financial sector that has turned them into volatile financial assets overshadowing their currency nature. Accordingly, the daily price of Bitcoin is much more relevant than its purchasing power. Indeed, holding Bitcoins and playing the market is more meaningful and profitable than using them as a primary means of exchange. The tension between the financial personality and the currency function is what drives Bitcoin’s et al. behavior. Each is sternly and stubbornly pulling in its own direction, thus creating a unique dynamic. So far, Mr. Finance is winning. Here we should also remind ourselves of the various limitations that Bitcoin and similar cryptocurrencies have regarding scale, speed, costs, interoperability, and energy consumption, to name a few.

Against this backdrop, El Salvador (ELS) has just approved legislation submitted to the National Assembly by the current President to make Bitcoin legal tender, thus becoming the first country to do so.

The small Central American nation is one of the countries that adopted the US dollar as national currency 20 years ago. The country’s total population is about to reach  6.5 million, with 1.5 million living abroad. According to World Bank data, only 50% have access to the Internet, and almost 30% live in poverty. Mobile subscriptions are over 140%, but the actual number of users is close to half. Remittances are a critical economic driver representing 10% of GDP while dwarfing FDI, 10 times smaller.

Moreover, 70% of the population has no access to financial services – the statistic most cited in media reports about Bitcoin’s adoption. Migration to the more affluent North is still on the top of the list of many in the country, given the dire local situation  –  no matter if they are told in their face: “Do not come.” I am sure no one is expecting a red carpet upon arrival in any case.

Will the recently approved “Bitcoin Law” help address any of these challenges? Does the country has any particular comparative advantage that makes Bitcoin use more feasible? What about Bitcoin’s roller-coaster value nature 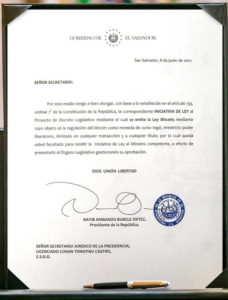 ? These and other questions have been placed on the table after the law’s approval.

The law approved by the National Assembly is surprisingly simple. It contains ten short articles that I have summarized below.

The 10 articles touch on three core themes: Monetary policy (1-3, and 6); Local capacity(4, 7, 10); and Bitcoin convertibility (8 & 9). Article 6 is the most important policy decision as it reassures the public that the US Dollar will remain the currency standard. That will also appease foreign investors and IFIs (WB, IDB, IMF) working in the country. The other three are somewhat tautological as the ELS government has no power over Bitcoin and cannot control its price nor how prices can also be expressed in Bitcoins. As mentioned above, monetary policy in the country is conspicuously absent so trying now to have one seems odd. One also has to wonder if Bitcoin needs approval from a government to be used within its territory. That seems contrary to the libertarian philosophy underpinning cryptocurrencies. Indeed, the Bitcoin Beach initiative located in ELS El Zonte has been operating for almost two years. While the initiative is part of a larger community-based project started in 2017 with the support of US non-profits (and has religious and missionary long-term goals), it has been using Bitcoin to support the local economy.  Nevertheless, the Government could prevent Bitcoin from being used. That could work if the Government had the capacity to enforce such a mandate. But then it will lose prestige and popularity. Just ask Turkey.

Articles 4 and 7 implicitly address the issue of capacity in both the public and the private sector. If locals can now pay taxes in Bitcoin, the Government must then build the institutional capabilities needed to handle the new cryptocurrency inflows. The same goes for the proposed institutional instance deemed to oversee the law’s implementation. On the private sector side, small and micro enterprises might be the most impacted negatively. They do not have the surplus capacity to rapidly transition to a new form of payment. Moreover, such a demand could bring forward higher operational costs on top of the transaction fees Bitcoin demands. That might lead to higher business failure rates or diminished market shares for many of them. I have to assume that the implementation of article 10 will address these critical issues from the onset.

Given Bitcoin’s roller-coaster nature, Bitcoin convertibility is quintessential for successful implementation. Article 8 and 9, the most detailed, tackle the issue by proposing “automatic and instantaneous” conversion from Bitcoin to US dollars. As far as I know, a conversion process with such characteristics does not exist anywhere. Typically, Bitcoin holders wanting to sell head to cryptocurrency exchanges that will process such requests after complying with KYC and AML regulations. However, that process is far from automatic and instantaneous. In this light, I think the ELS government will have to innovate to ensure such a smooth conversion process is in place. Soon after the law was approved, the President indicated that his government planned to launch a 150 million USD fund to ensure that automatic and instantaneous conversion was available. Indeed, ELS is subsidizing the implementation of Bitcoin as legal tender in the country.

The ELS Government has partnered with Strike, a Chicago-based micropayments company using the Bitcoin Lightning Network, for implementation. Back in March, the company launched its app to support Bitcoin micropayments in ELS. Strike furnishes a simple wallet app that can be easily downloaded and installed on any smartphone. I did just that but was then told that Strike is not available in my region  – a place where many ELS migrants also happen to live.

Obviously, for companies like Strike, the fact the remittances to ELS are over 5 billion USD per year is music to their ears as they could undercut traditional money transfer companies that usually charge hefty fees per transaction. In a recent interview, Strike’s CEO mentioned that the company was ready to assist the ELS government on the technology side of the process. I have to assume he was also referring to the “automatic and instantaneous” conversion process that needs to be designed and deployed. That is good news, in a way. Moreover, the CEO mentioned that, in his view, the main driver of the project was to close the financial services gap discussed above.

Indeed, the ELS Government is not alone regarding the adoption of cryptocurrencies. Several others have taken steps in a similar direction with the difference that their target is a Central Bank Digital Currency (CBDC) while continuing to allow, in most cases, Bitcoin and other cryptocurrencies transactions among consumers. For example, back in April, Indonesia launched a government-backed and Sharia-compliant cryptocurrency with the support of a private sector company. Although it has received less media attention than ELS, Indonesia shows that another way to adopt cryptocurrencies at the national level is possible. Moreover, several rich nations are also considering launching their own national CBDCs while China is already in the early stages of implementation. For them, adopting Bitcoin or any other existing cryptocurrency is a risk given its volatility and limited or unpredictable long-term supply. However, bear in mind that the adoption of CBDCs does not preclude the circulation of cryptocurrencies in the consumer space, nor does it demand their elimination.

Lost in the hype created by ELS’s “Bitcoin Law” is the nature of the political regime in the country. The same National Assembly that approved the cryptocurrency law removed the  Attorney General and all five magistrates of the Constitutional Chamber of the Supreme Court last month simply because they did not support the President. Such action prompted USAID to redirect funding away from the Government. And in February, the President showed up at the Assembly backed by the army to press legislators to approve one of his pet projects. It worked, but shades of populism emerge all over the place. But, of course, the President is also banking on his very high popularity, over 80% favorable and not showing signs of reversing course.

The real meat of ELS “Bitcoin Law” can be found in the articles related to capacity. Additional details on this have yet to emerge, however. On the other hand, the convertibility theme has already drawn the Government’s attention with its 150 million USD commitment, resources that could go a long way in tackling local development priorities. One thus has to wonder about the real intentions of the new law. It sounds like CryptoPopulism, that is,  politicians strategically using cryptocurrencies to increase their power, control, prestige and image within a given political regime. Will not be surprised if other developing countries follow the same path. Shades of Cryptocolonialism also pop up here, permeated with a thick coat of good old techno-utopianism.

In the end, what really counts is on-the-ground implementation and impact. ELS “BItcoin Law” will become active three months after its approval by the National Assembly. Let us see how far it gets, albeit I remain skeptical.

AI Nationalism?
Waiting for yet another Industrial Revolution