A few months ago, the top U.S. General was summoned by a Congressional Committee to explain why “Critical Race Theory” was being taught in the military. The General’s response built on the idea that the better one knows the enemy, the higher the chances of winning. Fighting unknowns is just like shooting in the dark, thus putting the innocent at lethal risk. When pushed by one of those congresspeople who firmly believes that our future resides in the past, the General did not mince any words when saying that he had read Marx, Lenin and Mao. And that did not make him a communist, he concluded.  I am sure that if the General was a communist, he would never have reached his current status.

While I do not generally engage with Generals, I must admit that, in this case, the good General undoubtedly hit the nail right on the head, silencing our-future-is -the-past voices in the process. I do not know which books and texts he read from the abovementioned authors. I have read Marx extensively, Lenin to a point and no Mao – although I have a copy of his famous red book  I bought over 30 years ago.  In the past, I met Maoists that read mostly Mao, some Lenin and little Marx – not beyond the Communist Manifesto.  I also met so-called “communists” that read mostly Lenin (and Stalin, unfortunately), a bit of Marx but wholly ignored the Chinese revolutionary – like me. While at the time these two camps were on the verge of a civil war at my college (and many others too!), I was shocked to discover that most of them, regardless of team membership, have never read Das Kapital, nor were they planning to start soon.

The academic curriculum required that we read Descartes, Locke, Berkeley, Hume, Smith, Kant, Hegel, Ricardo, Marx, Weber, Durkheim and Parsons sequentially and directly from the sources, no textbooks allowed.  For example, to get to Marx and Weber, we had to first complete all the previous courses, complemented by additional studies on world history. And we read their core works (Das Kapital and Economy and Society, respectively).  When we got to the Marx course, both Maoists and “communists” extensively used “Marxist” textbooks published by the Soviets and others to grasp the content. The final exam comprised an oral presentation to both professor and class. That helped them a lot as, most being activists, they had incredible speech skills I completely lacked. Not surprisingly, I barely made it while they passed with flying colors. Form beats content, by far.

Interestingly, the allergic reaction that demands avoiding Das Kapital at all costs is also a trait of the our-future-is-the-past cohort that challenged the good General. The rationale here is that Capital is the Communist Manifesto on steroids, expanded almost 3,000 pages. Indoctrination tout court, dangerous stuff. Others with less recalcitrant worldviews have a similar idea from a more positive side, thus expecting to find detailed answers on building a different type of social organization, socialist or otherwise. Needless to say, both are shooting in the dark. As the first sentence of Das Kapital says, the book’s goal is to explore how wealth is created in societies where the “capitalist mode of production prevails”  – capitalism being a word the author never used.

Perhaps more suggestive is the book’s subtitle, “A Critique of Political Economy” (and not THE critique!).  That has been the topic of many other blogs and even books. At any rate, it helps to understand what Political Economy was at the time and what the author meant by critique.  The rationale for the academic curriculum I had to go through makes a lot of sense here. In any event, I wonder if the our-future-is-the-past team is aware of such a subtitle. I would not be surprised if they also push back against all critical perspectives arguing that our future is not the past, recent or not.  Not sure that would work, but I am sure it will backfire.

A word cloud of Das Kapital Volume 1, based on the first English edition published in London in 1887, is also beneficial here. 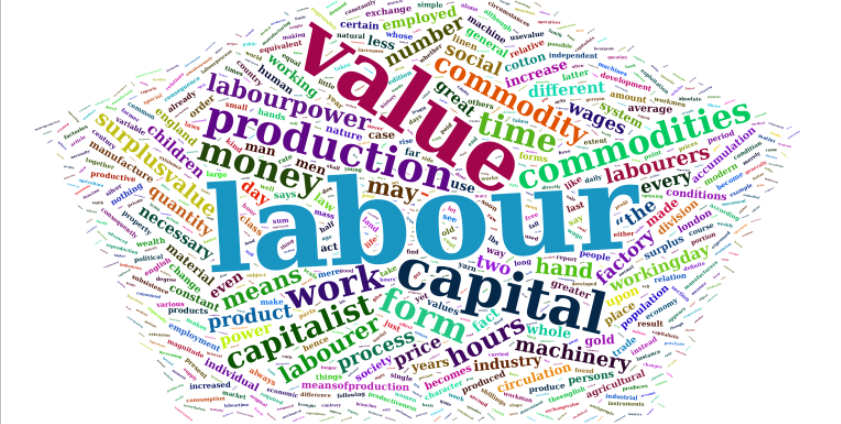 To get an idea of the relationship between most used words, note that Labour appears almost 2,600 times while Capital and Capitalist appear over 1,200 and 650 times, respectively. On the other hand,  both Socialist and Socialism appear less than five times each and thus, we cannot even see them on the chart.

Reading Das Kapital for the first time is a bit demanding, thus not ideal for bedtime reading – unless you want to fall asleep really fast without understanding any of the content. On the other hand, it is not as difficult as reading Hegel’s Science of Logic or his Encyclopedia.  I used to advise acquaintances and friends who had plans for building their own businesses to read Das Kapital to learn how to maximize profits and beat the competition. Not only Volume One but the three of them!

On the other hand, as a critique, Das Kapital also reveals the weak spots of the “capitalist mode of production,” thus providing fertile ground for humans to act and react accordingly, to either change it or protect it against any change. Take your pick. Contrary to common hearsay, Das Kapital does not argue that capitalism will automatically fall sometime soon.  Only human agency and interaction will decide our own future -which is not in the past!